As artist we primarily work alone in our studios, the projects below allowed me to be part of a team, to create work that would be in the public eye and help to convey information and identify. I love the process of creation and a teamwork model. If I can be of help to you and your organization please reach out for a quote. 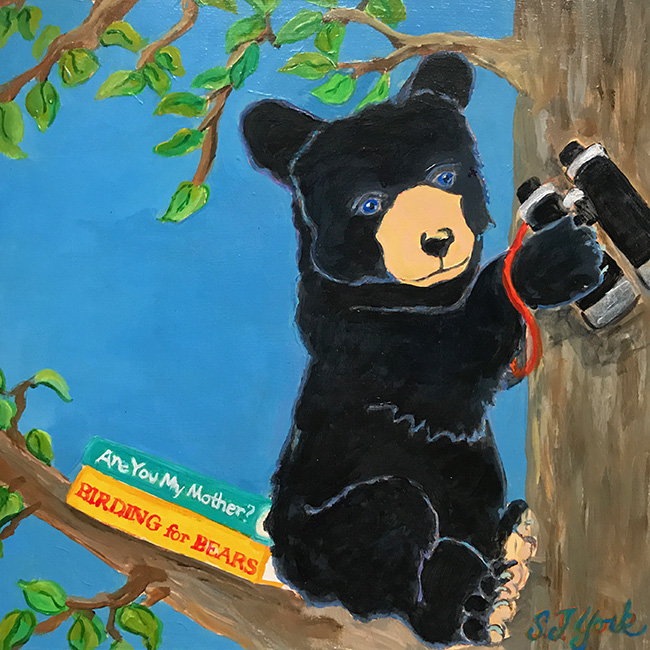 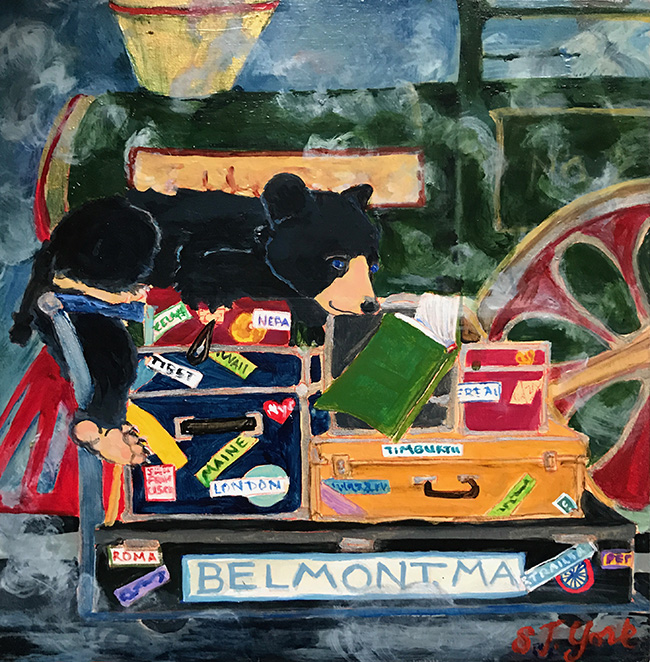 Finalization and creation of the  logos for Belmont Books and The Bear Cafe used in signage, bags, T-shirts and other options. Additionally Susan painted five panels using an active Bruno the Bear to adorn the Children’s section on the second floor of the store. 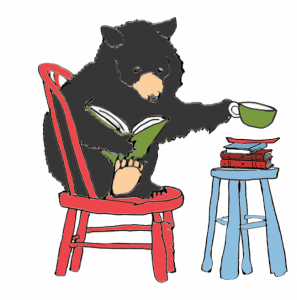 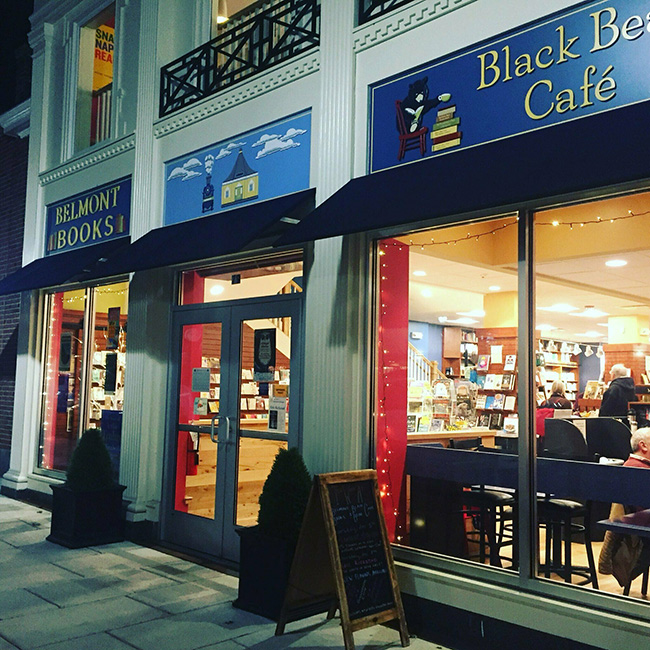 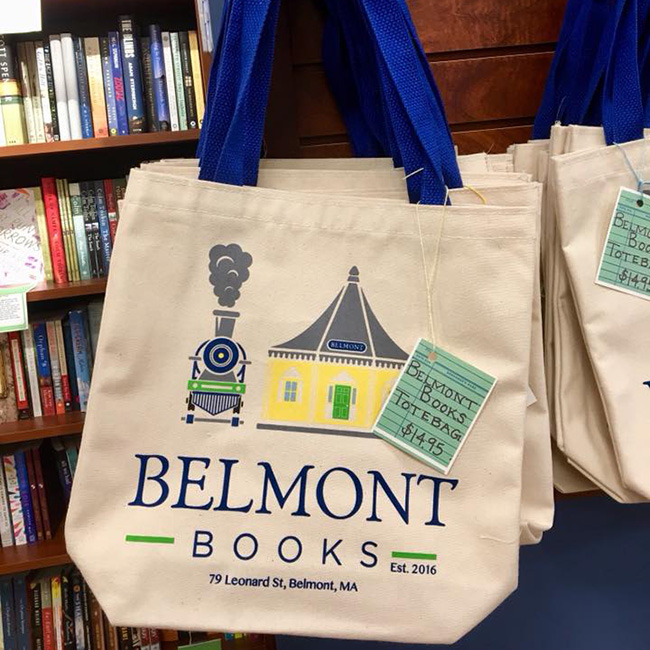 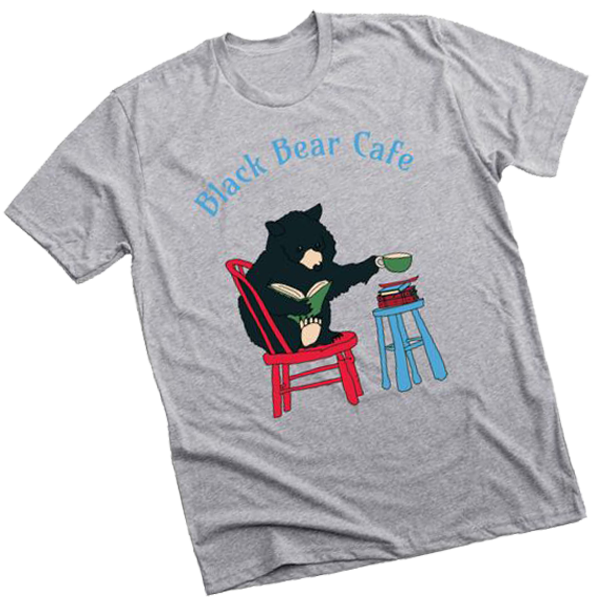 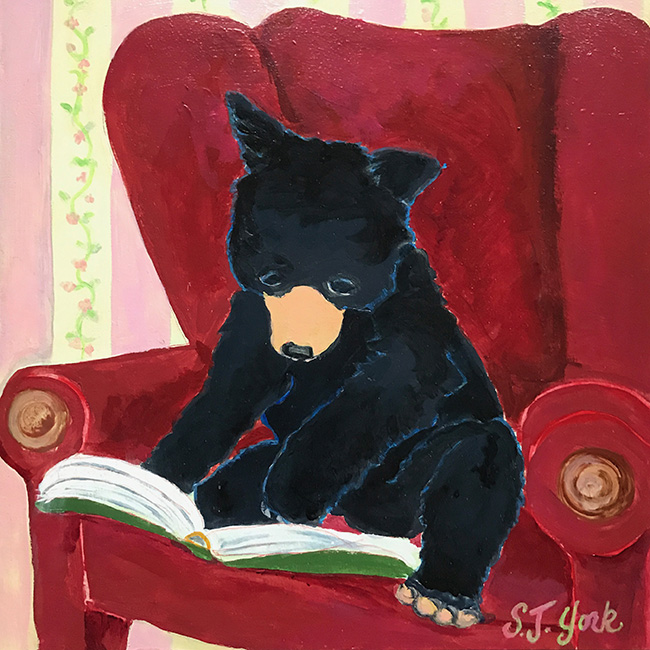 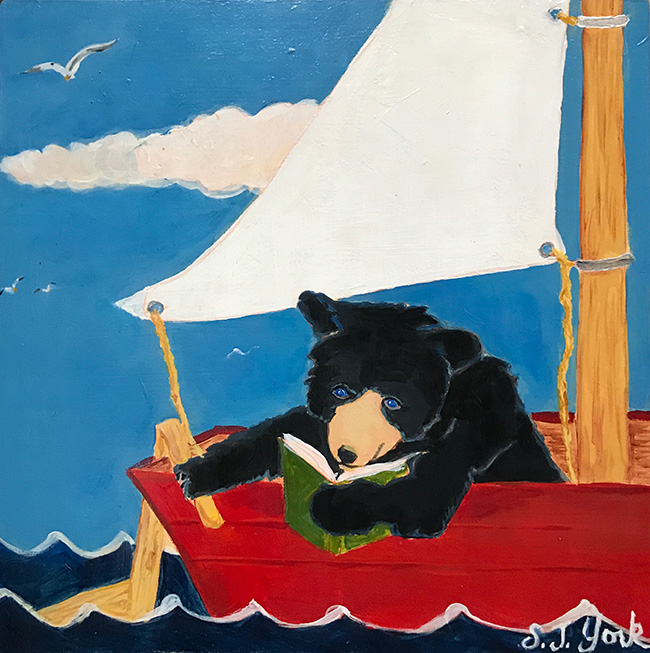 The children's section features a mural by Susan York, once a bookseller at the old Waterstone's in Boston, Mass. The mural depicts famous cats from literature--as well as Hermann's and Kate Whouley's cats.

A fun project to imagine and make come to life. Susan is a passionate collector and admirer of children’s book writing and illustration. She pays homage to many literary “cool” cats. 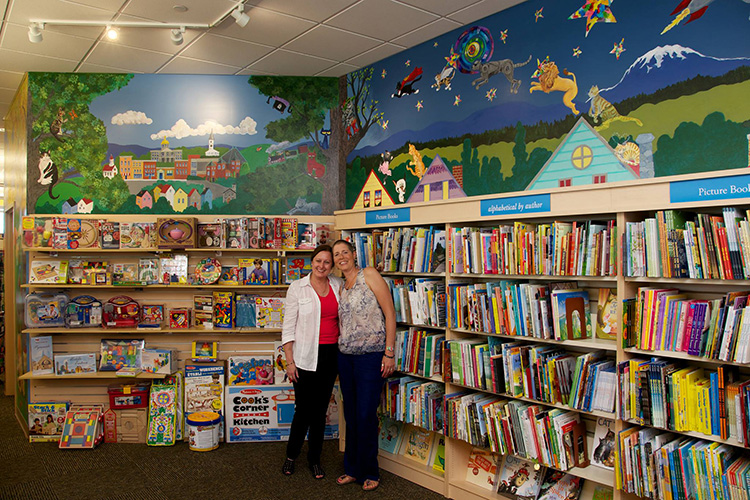 "I’d like to extend my thanks to Michael Herrmann owner of Gibson’s Bookstore for trusting me with his new walls; Kate Whouley of Books In Common the designer who suggested that I submit a proposal, and Anne Sweeneywho took many of the great photos of this project shown on this page. Additionally I’d like to thank Joanne Piazzi and Sue Richardson who were invaluable assistants allowing me to finish happily a little earlier then scheduled." 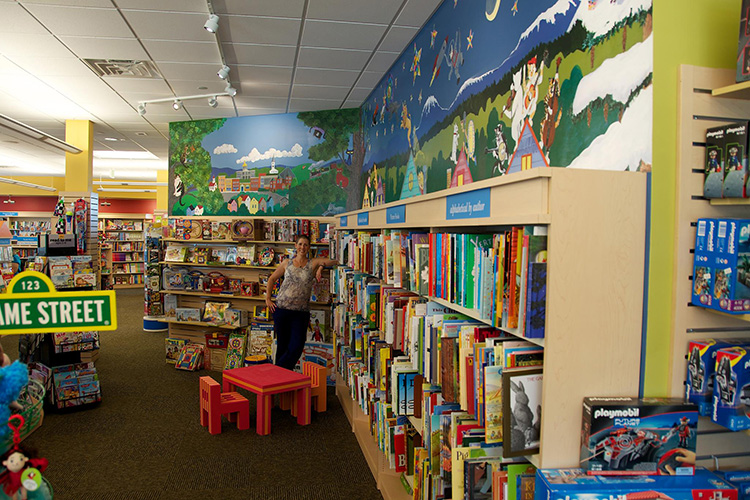 The children's section features a mural by Susan York, once a bookseller at the old Waterstone's in Boston, Mass. The mural depicts famous cats from literature--as well as Hermann's and Kate Whouley's cats.

If you are in Concord NH, Gibson's Bookstore is a must! Great job Susan York, (assistants: Joanne Piazzi and Sue Richmond) on the mural and the sidewalk painting! Susan York, the mural is great! So whimsical...so you! What's next, hmm...I know this great small library in Southern Maine.

Susan York's amazing mural spans the seasons and the hours (and travels across three walls in the store). We begin on a winter's night and end on a pumpkin-weather sunny fall day. Here you see the view from the cash wrap in the children's department.

Connections at the "Love Your Neighbor" Building 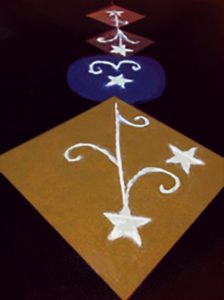 While thinking about how to activate the black asphalt sidewalk space at the Love Your Neighbor building in Concord, NH, I couldn’t help but think about Connections. How people form groups, families, friends and how some people end up or prefer to be alone. How a brief connection can have profound impact or the impact is not what we believe it is at all. How ideas and feelings are shared and spread.

Using highway striping paint, I graphically represented those ideas through various shapes of different sizes and colors. However hidden within the shapes using airport quality reflective glass bead, I embedded stars, spirals and lines that tell the hidden inner story of the connections, which can only be seen at night or in certain angles of sunlight. The use of light and glass bead reveals the quality of a burning idea while simultaneously representing the spark of life that we all carry within regardless of our outward shape or size. 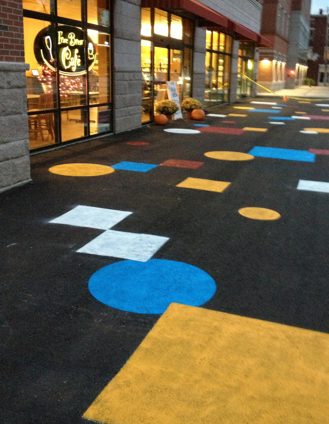 I work next door to Gibson's and saw some children hopping from painted object to painted object earlier this week. Their father was taking picures of them while they were enjoying the various shapes and colors on the sidewalk. It was fun to watch. And the mural inside Gibson's is spectacular. It is fun in every way. 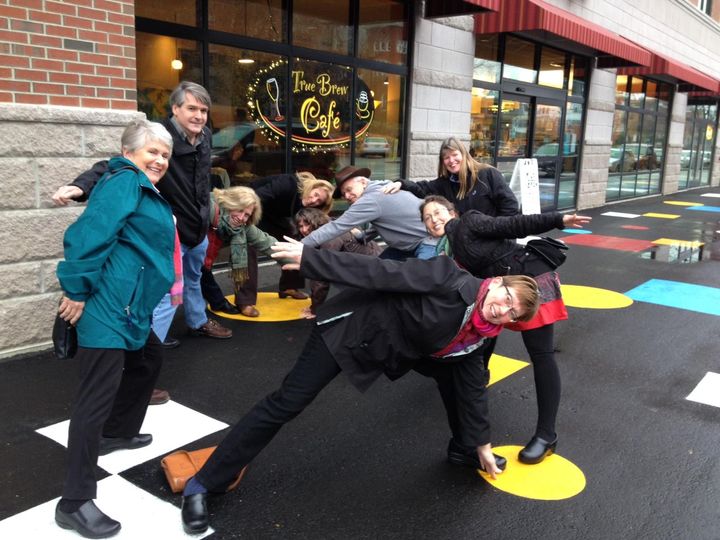 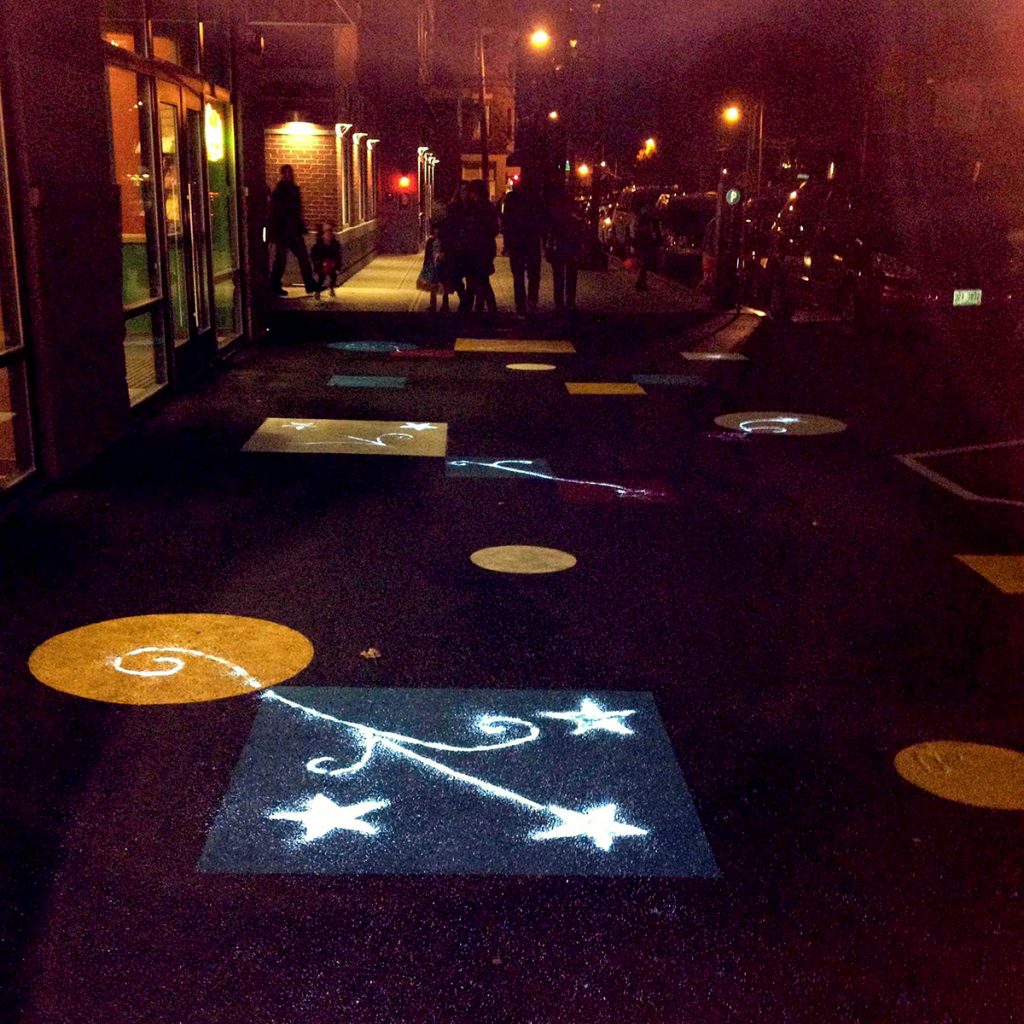 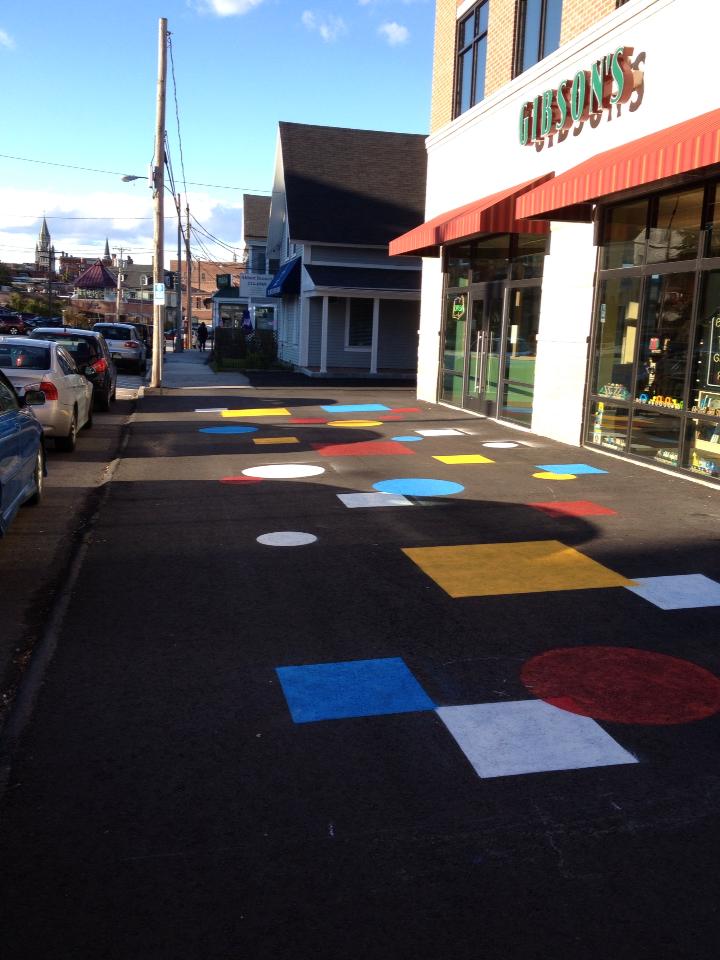 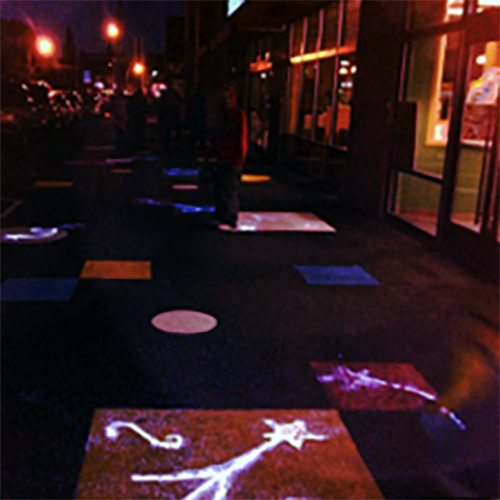 My Turn: Here’s the Story behind that Sidewalk Art

By MICHAEL HERRMANN For the Monitor Tuesday, February 25, 2014

Leslie Skimming’s letter to the editor about the sidewalk art outside Gibson’s Bookstore (“Unattractive,” Monitor, Feb. 25) made me wince, but it’s an opportunity to tell a pretty interesting story.

As we were planning our new store, we knew that Concord’s Complete Streets redesign was also in the works. There was no point putting in a real sidewalk in 2013 only to have it destroyed in 2014, so the contractor left the front of the building as black asphalt. But when we opened in September, we realized just how stark and dull such a large expanse of black asphalt could be. It really did not do justice to our beautiful new building.

Steve Duprey and Jon Chorlian, who developed the building, asked me to bring our design consultant Kate Whouley back into the project. The mission: to do something interesting with black asphalt that would also be inexpensive and that we wouldn’t really mind seeing destroyed in less than a year’s time.

Whouley’s immediate suggestion was to enlist the aid of Susan York, the Maine artist who designed and painted the beautiful mural in our kids’ section. (It’s a fun and frankly breathtaking depiction of various cats from children’s picture books.) York and Whouley put their heads together, and York came up with a plan for the sidewalk that was intricate, beautiful and way too expensive.

I wish we could have done it; I wish the people of Concord could have seen it. But it really was too ambitious for the need, in every way.

Plan B was what we have today. It’s a project called “Connections,” and to my mind it is whimsical, a great conversation starter and a perfect way to turn what had looked like urban blight into something fun. “Connections” expresses what we at the bookstore are all about, and our neighbors – the great lawyers at Orr & Reno, hypersmart software developers at Bittware and the caring folk at AARP, among many others – share that perspective. Here’s what York had to say about it: (see above) …

That all sounds pretty intellectual. But I also have to say that the children love it. It looks like a big bright game of hopscotch to them – when it’s not covered up by snow.
I hope Skimmings will come back down and give our sidewalk another chance. It was a generous and clever gift from Duprey – who rarely misses an opportunity to be generous and clever – to the neighborhood and to the people of Concord. And I hope that everyone who hasn’t seen York’s wonderful mural inside the bookstore will come have a look. It is truly special. 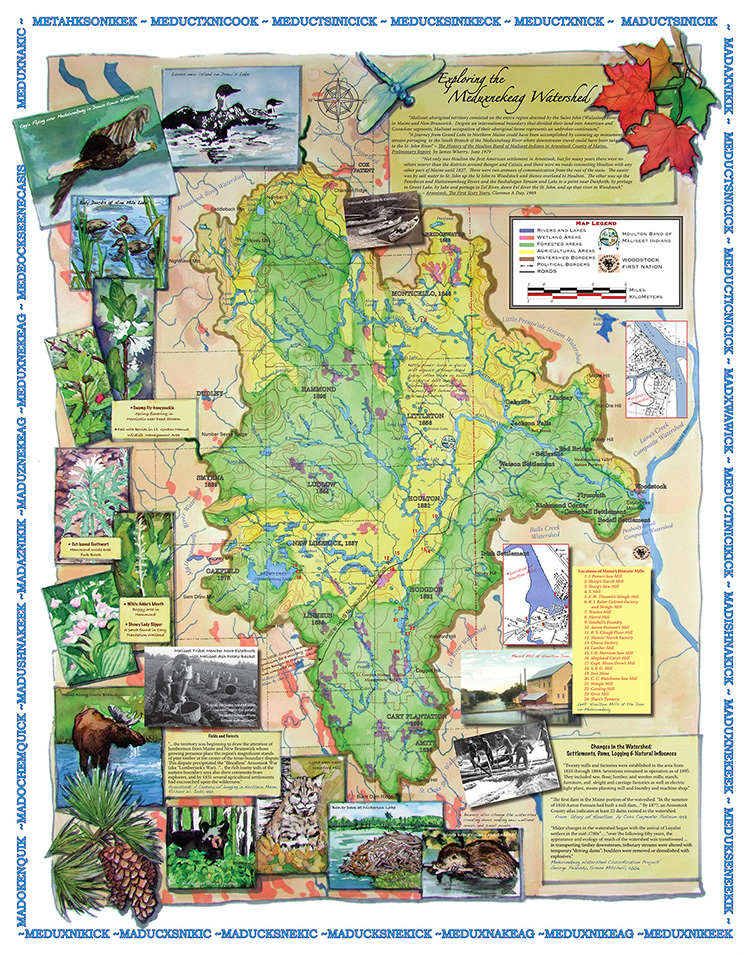 Working with the Houlton Band of Maliseet Indians and the First Nations of New Brunswick Canada, I was tasked with creating a historic map that would convey information about land use, the flora and fauna of the area, as well as information on climate, communities and their effects on this international watershed area. At our first meeting the research team handed me a dozen large binders of collected information. As a team we whittled down the information to a a single 24″x 18″ poster to spur additional interest and convey some of the source material. I proposed having the exploring artist’s messy desk portrayed on the back of the poster. 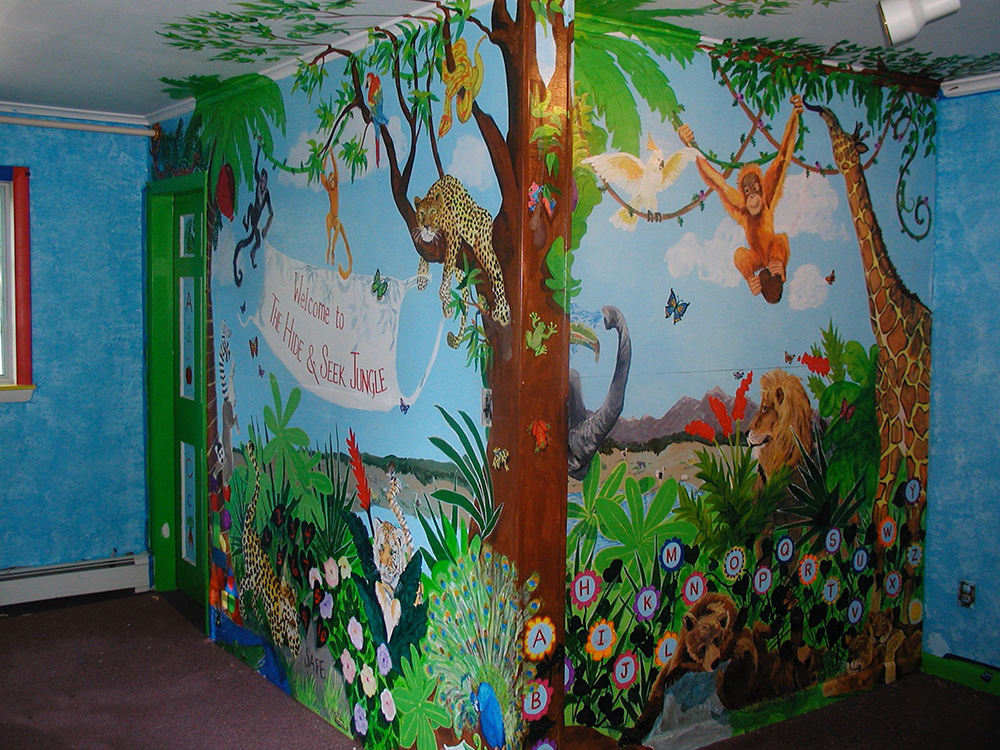 Stepping Stones was a residential program for Runaway and Homeless Youth who were pregnant and parenting. The two murals had different objectives.

The goal of The Hide & Seek Jungle was to create a fun learning environment for children and their parents to explore early literacy of colors, numbers, alphabet and animals.

Quiet Undersea’s goal was to provide a calming color palette and subtle reminder of the joys of parenthood. 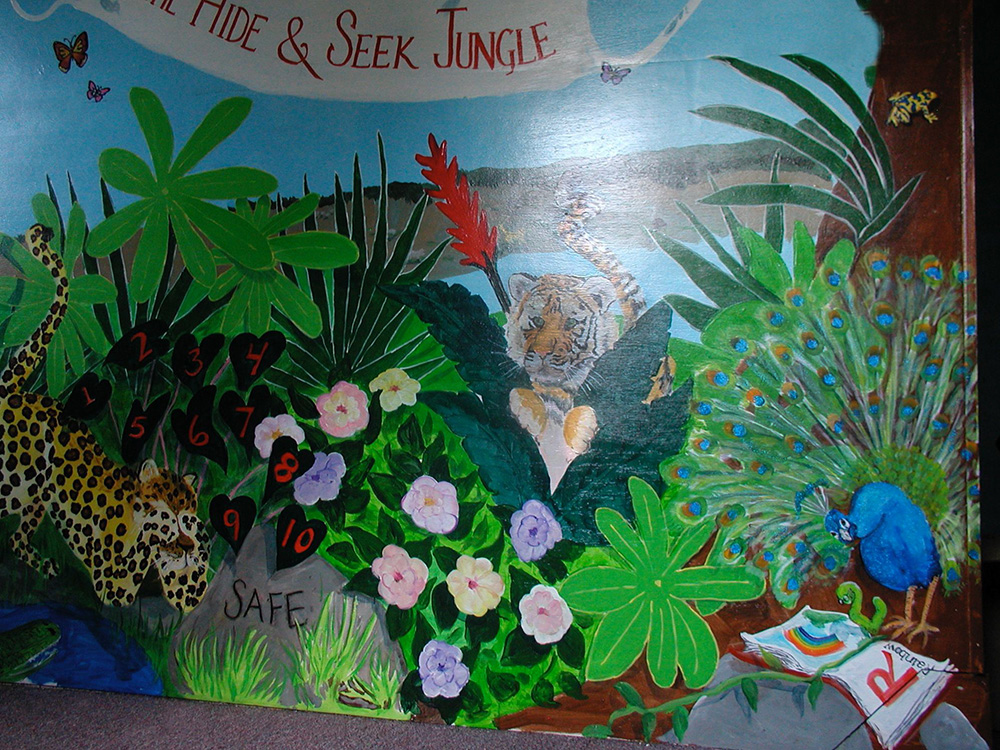 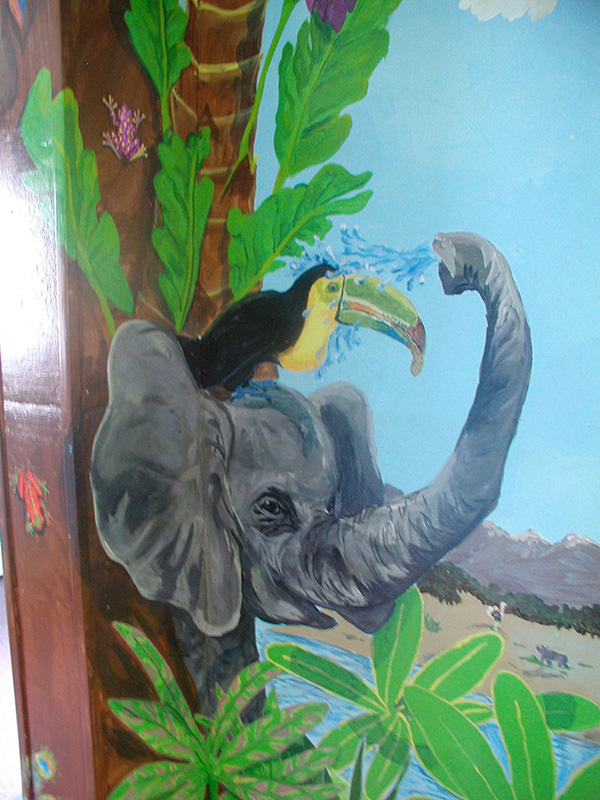 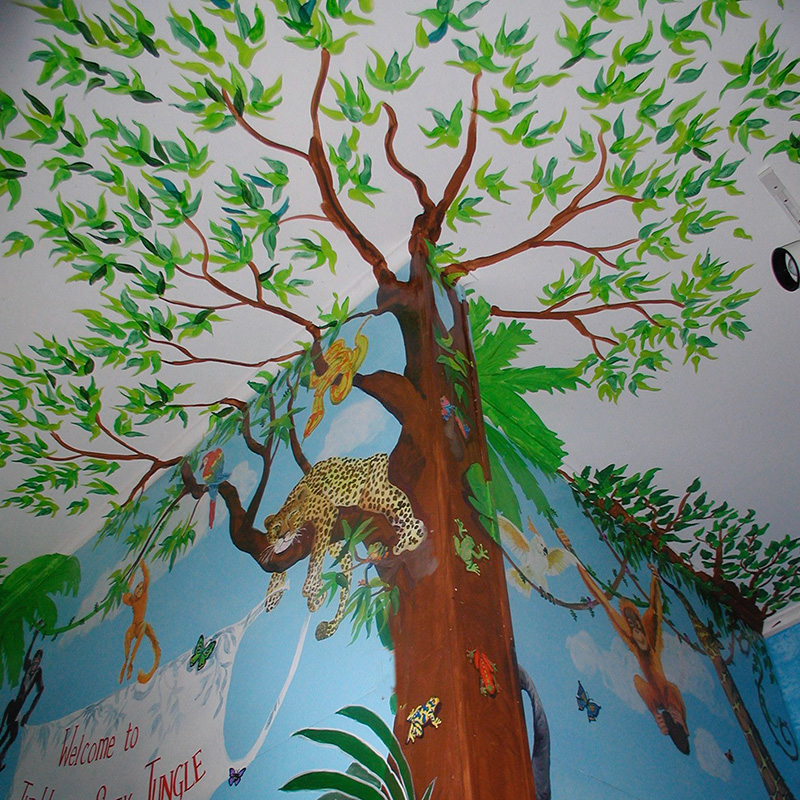 Welcome to the
Hide & Seek Jungle 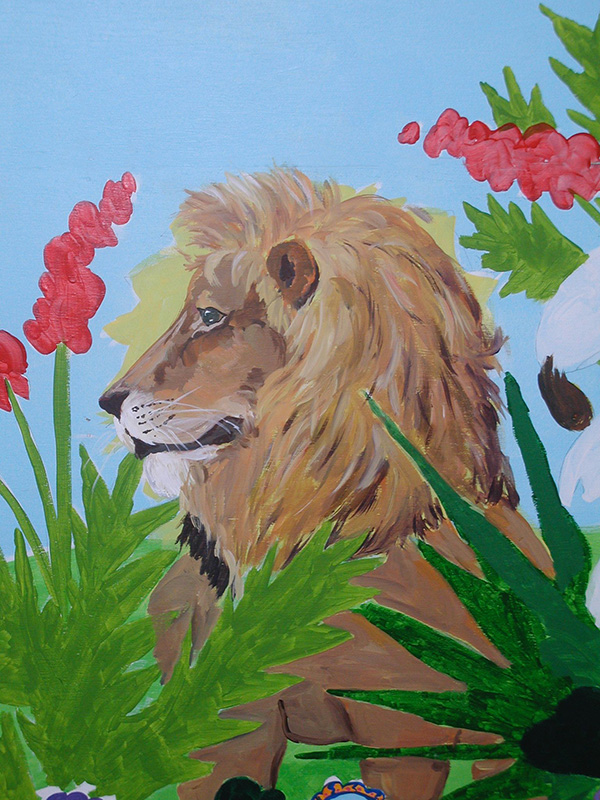 This nursery area at the end of a corridor of bedrooms was for tiny babies to explore tummy time and included a changing area.

The sea creatures represent a variety of family structures. The only non-paired parent and child is over the changing table. The mother mermaid hovers reassuringly above waiting to scoop her baby back into her arms. 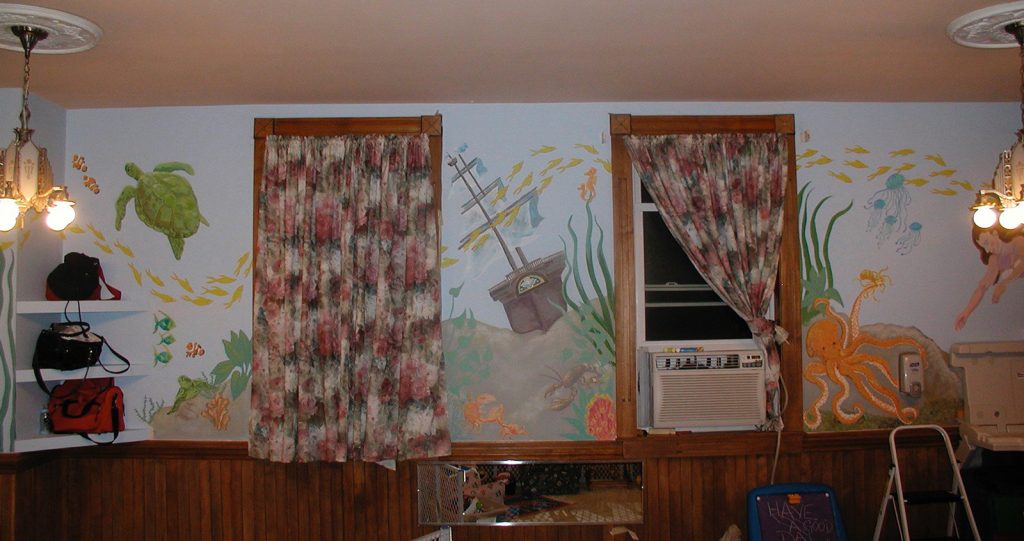 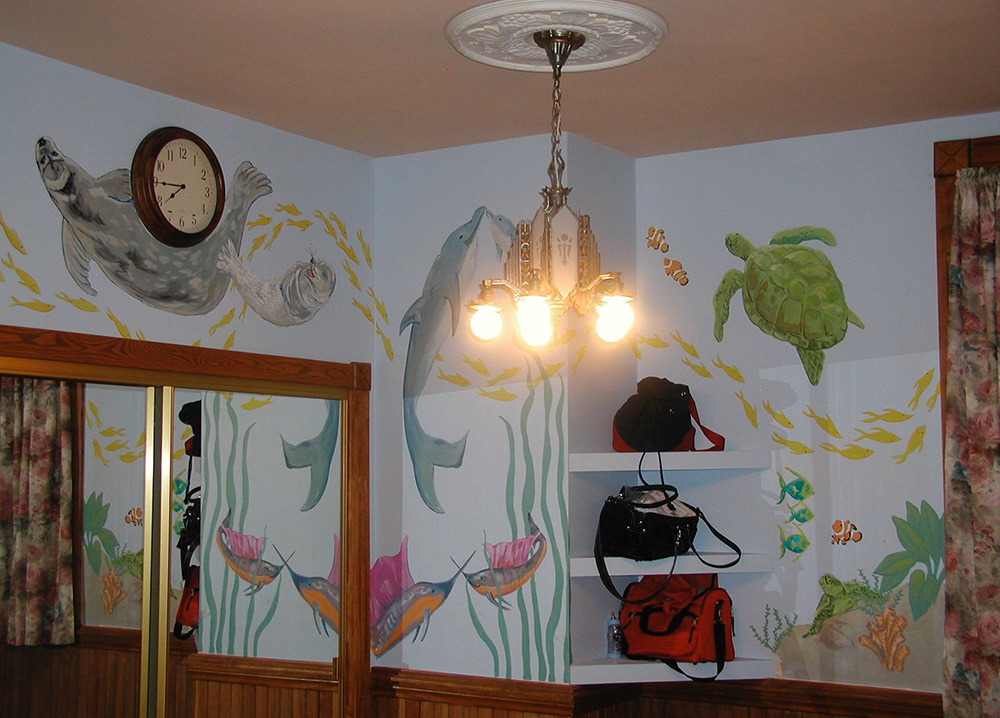 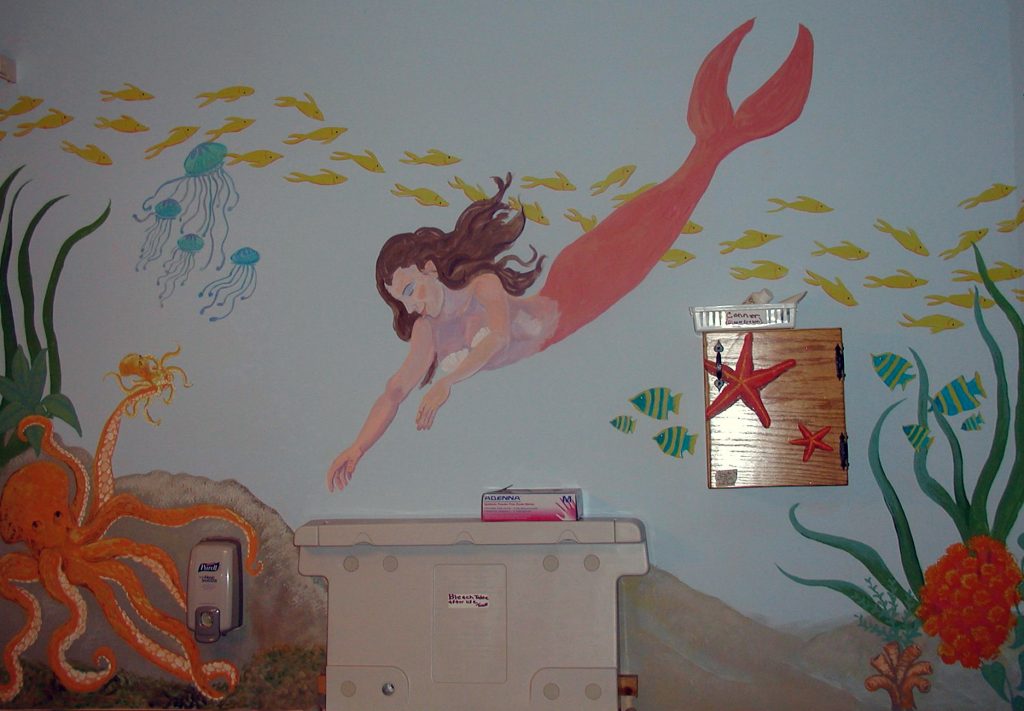 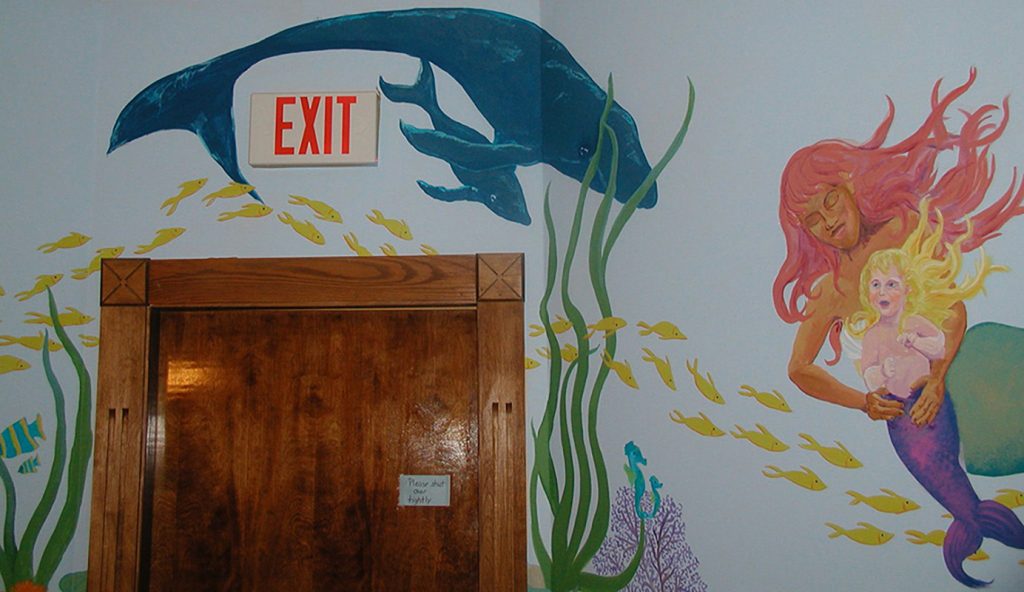 Originally created for Portland, Maine’s Lighthouses on Parade, Shine Your Light found its final home at the Levey Day School. The project incorporates two verses from the Old Testament in both English and Hebrew, as well as the poem of Rachel Lyman Field. 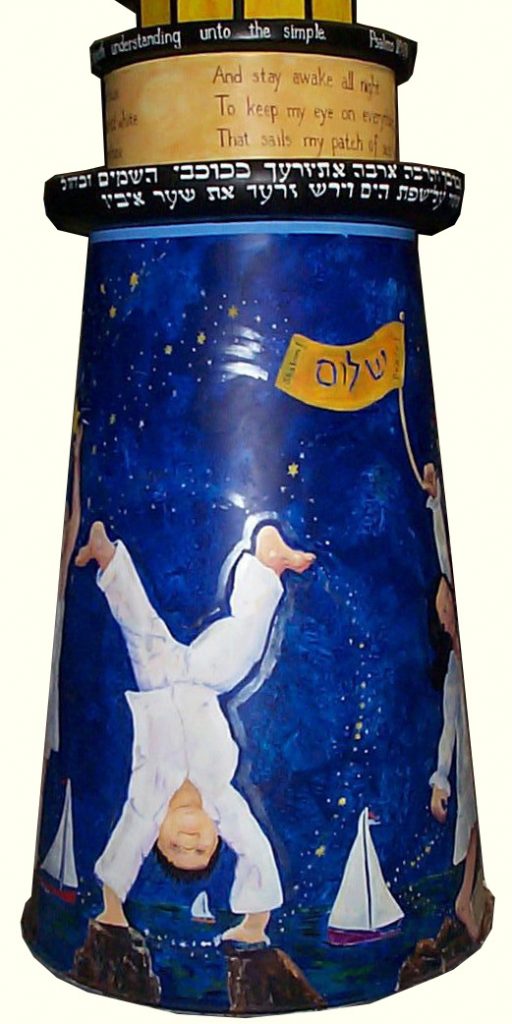