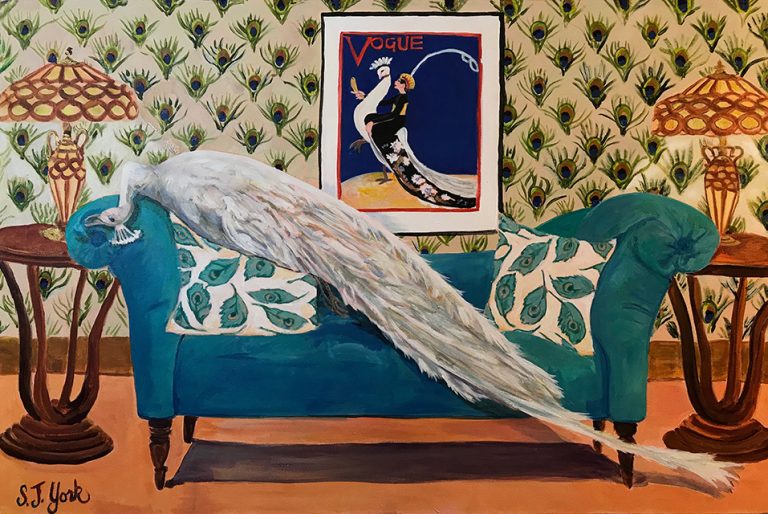 Somedays It's Just All Too Much

Somedays It's Just All Too Much

A peacock was very unhappy with his ugly voice, and he spent most of his days complaining about it.      "It is true that you cannot sing," said the fox, "But look how beautiful you are!"      "Oh, but what good is all this beauty," moaned the dishearten bird, "with such an unpleasant voice!"     "Oh hear," said the fox, "Each one has it's special gift. You have such beauty, the nightingale has his song, the owl has his eyes, and the eagle his strength. Even if you had a eloquent voice, you would still complain about another thing." ~ Aesop’s Fable: The Peacock’s Complaint
SHOP THIS EXHIBIT NOW

In 2016, after finishing a large body of work known as the Gathering Goodness Mosaic focusing on Peace, Joy and Love, Shokan artist Susan J. York took a look at her native fauna and found herself focusing on the subtle beauty of the wild turkeys that visited her yard. The peaceful setting was in sharp contrast to the daily headlines of campaign slogans, shootings and racial tensions.

The Phasianidae Family comprises birds of the pheasant family including peacocks, turkeys, pheasants, partridge and quail. York uses these and other feathered friends to create beautiful paintings with a deeper – sometimes darker – meaning when one looks at the titles or the exhibit is taken as a whole.

Turkeys and peacocks are members of the same family. Yet one is revered as a pet or a symbol of fashion; the other is considered a game bird worthy only of being hunted and eaten rather than given equal respect. One screams with human like sounds, the other gobbles and goes about its business.

The peacock is a reflection of our first world problems. Being overwhelmed by emotions and unaware of how much we have as we focus inward on problems of self.

By contrast the turkey is a native American symbol of abundance and exemplifies gratitude in our Thanksgiving story. Benjamin Franklin’s commentary on the American Turkey as a ” … respectable Bird, and withal a true original Native of America. He is besides, tho’ a little vain and silly, a Bird of Courage, and would not hesitate to attack a Grenadier of the British Guards who should pre-sume to invade his Farm Yard with a Red Coat on.” This sliver of history and the Aesop’s story of the Peacock’s Lament provide the contrast that make the two classes of birds symbols for the Haves and the Have Nots, subjects to represent racial tension.

York also observed many woodpeckers at her feeders. Listening to the constant “rat-a-tat-tat” seemed to echo the sounds of children playing with guns, which reminded her of the now too common school shootings. Then one day she discovered a Flicker at the feeder; it looked like a puffed up woodpecker in a leopard skin coat. When she discovered a species of these birds known as the Gilded Flicker… images began to percolate.

“By using birds as characters in this American Story, I hope to give us a way to look at our own humanity — or lack thereof — in how we are treating one another and what we seem to value.

“For I am a story addict. I want to know where a story will go but as any reader knows there are different sides to the same story; paradoxes that make the story richer for the contrast. Right now I don’t recognize the story that America is telling. I hear words like “Great, Better, Best, Wealthiest, Melting Pot, and at the same time words like “Sh*thole, Walls, Sons of B*tches, America First.” from the mouth of the man elected to lead us.

“I love our country. The promise of the story started with the Declaration of Independence, The Constitution and its Bill of Rights. The ideals in these documents have been fought for, bled for and lead people to our shores to be part of this land. I love that our Revolution inspired the French and to honor our part in their history they gifted us the Statue of Liberty.

I love the poem on her base. These are the ideas that have balanced the daily news stories that have torn at my soul while I worked on the paintings for this exhibit.
“What story is our country telling you?”
~ Susan J. York

See Something You Like Below? Jump over to the SHOP to Purchase & Read the Exhibit Text for Each Painting